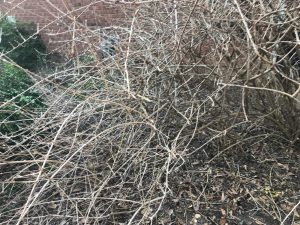 I have to admit to all of you, I detest yard work and my husband detests it even more than I do.  I am not good at it and I don’t enjoy it, but when I set my mind to something, well, it usually gets done.   Today, I decided it was time to attack an area of our landscaping and attack I did.

This bush you are looking at is a beautiful Forsythia bush (not sure why I even know the name of it).  In the spring it is beautiful with yellow blooms.  When it was first planted, many, many years ago, it was the perfect size bush for this particular area of my yard.   However, over the last several years, this part of my landscaping has been ignored and unattended.  Several bushes morphed into other bushes and vines were woven in and out of all of them.  This pretty bush had turned into several small bushes and began taking over a very large area, squashing out and growing over several other bushes.

I had a mess.  It was hard to tell where one bush began and the other one ended.  But, as I said, I was determined to take care of this mess so I headed in the backyard with my less than adequate tools and began to prune and cut.

The tools I used were an ax,  a pruner (borrowed from the neighbor), a machete, and my hands.  I would take whatever tool I thought I needed and use it until I realized it was the perfect tool or I would need to switch to something else.  Once I cut a stem or root, I would pull on the bush until that particular part of the bush let go and I pulled it free.  I became covered in dirt, got blisters on my hands, and scratches on my hand and arms.

The process of unwinding and untangling our thoughts requires the same thing it took for me to untangle the bushes.  You have to do it methodically, deliberately, and with the right tools.  You have to be persistent in your pursuit even when you feel like giving up, get dirty and it hurts.  You have to be willing to keep chopping, pruning and digging until you get to the root/truth.

We all live with a lot of lies we believe.  To live an authentic and happier life, we need to dig into the thoughts that are driving our behavior and be willing to examine what we find there.

I sit here tonight with pruned bushes, blistered hands, and scratched arms and hands, but having accomplished my goal.   That area of my yard can now flourish because I have given the bushes room to grow.  My desire for you is for you to go through the pain of getting to the truth knowing there will be room to grow and flourish on the other side of all your hard work and determination. 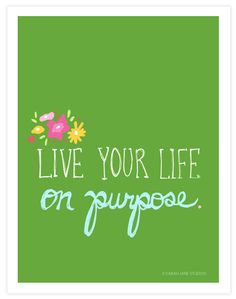 Living intentionally has a different meaning to everyone you talk to.  To many it means:

I’m not saying those things aren’t incorporated into living intentionally, but I am saying there is much more to intentional living.  Things like knowing why you are making the choices you are making each day.  Knowing what direction your life is going and where you want it to go.  Knowing your values so you can align your life up with those values.  Getting inside your head to know what thoughts you are really thinking that are driving many of your decisions.

Also, join me February 25th for The Intentional Life Seminar.  A day carved out for you to learn how to live more on purpose.   I would love to see you there!  Details below. 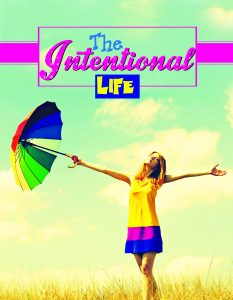 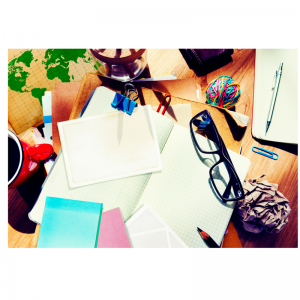 How many of you know it is CLEAN OFF YOUR DESK DAY?  Well, it is.  Hallmark just hasn’t jumped on board with a lot of hype, but us organizers love this day!

Here are a few quick tips about how to clean off your desk effectively:

So, even though I don’t have a Hallmark card I can send to celebrate this day, go celebrate by taking the time to CLEAN OFF YOUR DESK.  Let me know how it goes or if you have any questions. I’ll answer your questions right after I get through cleaning off my desk! 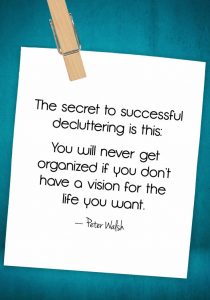 It is January 1st and I can bet at least 75% of the people reading this post have a resolution to de-clutter and organize.  As an organizer and life coach, I say go for it!  However, I will let you know there are some truths that you need to know before you begin.

2017 could definitely be your year to be more organized and de-cluttered.  Go into the experience with a clear vision, realistic expectations, and tenacity.  Clear the path for the life you want to live, not a life of managing stuff.

I have seen it more times than I can count…….the pain of clutter.

I have seen it in the eyes of my clients’ children when they talk about the “stuff” they will have to deal with once their parents are gone.

I have seen it in the eyes of the young children when they are so overwhelmed with clutter/toys,  they go watch TV instead of playing with all the toys surrounding them.

I have seen it in the eyes of parents who watch their children and grandchildren try to live in the middle of too much “stuff”.

I have seen it in the eyes of people whose thoughts and past lives are cluttering up their minds, their today and their future.

It is hard to own and think about too much “stuff” and it is hard letting go of too much “stuff”, but I know, without a doubt,  you are able to live a much fuller life with less “stuff” to manage.

There are 5 things I do, in the morning, to start my day off on the right foot:

1.  Make the bed.  It takes less than 5 minutes.  The great feeling of walking into an orderly room, at the end of the day, is well worth those 5 minutes.

2.  Eat breakfast.  Those that know me know I do not skip meals.  I am hungry when I wake up and I know my body needs fuel for the day, so I eat!  I eat anything easy and fairly nutritional and in moderation – oatmeal, cereal, salad, chicken, eggs or pizza.  Obviously, I do not discriminate against eating foods at particular times of the day.

3.  Plan my day.  I sit down, look at my day and plan it out.  What time do I need to be where and what time will I need to leave to get to each place.  Knowing what I need to do allows me to be realistic about what I can get done each day and keeps me on track throughout the day.

4. Take a moment of quiet.  This is an important part of any day…..just being still.  I take a moment to read a devotional, pray and to be grateful.  This moment can really set the tone for your day.

5.  Walk.  I try to walk for at least 30 minutes most mornings.  I have not conquered doing 7 days a week, but I do walk at least 5 days a week.  If it doesn’t get done in the morning, I make sure I get the walk in at some point of the day.

Yes, all this requires waking up at 5:15 am, but these morning habits have served me well, so it is well worth the early wake-up call!  What habits do you need to incorporate into your day?