Yesterday, while talking with my sister-in-law, I was reminded of this verse.  What a great verse to remind us all that there are seasons of life and that we cannot stay in one season of life forever.

Seasons are a part of life……..you can either fight them or go with the ebb and flow.  My contention is that it is much easier to ride the waves than it is to fight the current.

How do you feel about the seasons of your life? 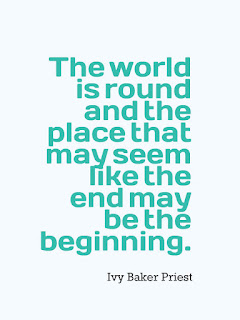 As I struggled to write an email to a friend that has been given a short time to live, I am somberly contemplating goodbyes.
I realized, a long time ago, I am not good at saying goodbye.  As a child, I was the girl that was homesick at camp; I cried when my parents dropped me off, I cried when they left after coming to visit, and I cried just about every night.  As an adult, I cry when I am driving away from their home.  I really cried dropping both of my boys off at college and when I had to say goodbye to my beloved dog. I wept, writing an email to a friend prior to her death on August 9th.  I had not seen her in many years but that didn’t matter.  There was a heart connection that had never been severed and I hated it for her family, her friends and all those whose lives she touched.  I wept, today, writing the other email to my other friend who will also soon go to be with Our Lord.  I weep for his family, his friends and for the hole that will be left on this earth with him gone.  Recently there have been families that have had to say goodbye to their children, a journey I cannot imagine taking.
When I work with people, in life coaching and organizing, I realize, we struggle with all kinds of goodbyes. We all struggle to let go of items that represent the past that is no longer.  We struggle with saying goodbye to a relationship. We struggle to say goodbye to bad habits, unhealthy lifestyles, and unhealthy thoughts. We struggle to say goodbye to our comfort zone.  We struggle with parting with memories.  We weep for what was, what might have been and what we sometimes fail to see can be.  ‘

I may never get good at the act of goodbye, but I pray I get better at knowing when to say goodbye, when I need to move on after the goodbye,  and to live the life I have been given.
So for now, I won’t say goodbye, I’ll say TTFN (ta ta for now). 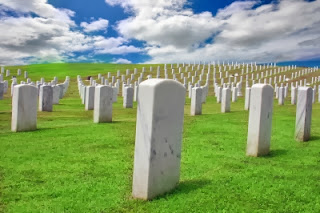 I guess I really am a total organizer or control freak, not sure which one, but I planned my own funeral. I actually planned my funeral at age 40 -I am now 54.  At age 40, I had 3 friends die of cancer and I was feeling very vulnerable.  At age 40 I had 2 young children, a daughter in college,  3 cats, 2 fish tanks and a husband.  At age 40, I started to think, what if I am next.
You have to understand, I have some good genes that have been passed down.  My father is 95 and my mother is 89.  They still live independently, still go volunteer at a facility that helps clothe the homeless, still walk a couple of miles at 5:30 in the morning, still work outside in the yard, still go play golf, still play bridge with friends and still love to read.  I have 6 brothers and sisters and so far we are all very healthy with the normal scares and hiccups but all doing well.  So, if gene pool accounts for anything, I am in the right swimming pool!  So, why the need to plan my funeral?
At age 40 I had been married 15 years to the same man I am married to now 14 years later.  I knew then what I know now; he would become totally overwhelmed at making decisions about my funeral should something happen to me.  The whole process would devastate him and leave him spent.  He would second guess and worry that he was not doing the right thing by me and he would certainly make it a bigger deal than I would want, so I did him a favor and took all the questions out of the equation.  I put my funeral wishes all in black in white…….leaving nothing for him to have to ponder or worry over.
Many people do not like to talk about the end of life but the fact of the matter is…….it is one of life’s inevitables – death and taxes.  I personally think it is a gift you can give to those you leave behind;  have your affairs in order and make your wishes known leaving no room for guilt, questions and unknowns.
Let me end this by saying, I plan on living many more happy, healthy, fun-filled, fantastic years, but in the event of my untimely demise, my funeral plans are in the important papers box in my office.  Now, I am off to go do some serious living!
I am a new grandmother.  I cannot believe I am old enough to be a  grandmother.  I love being a grandmother.  I am in awe of this precious little one they call Barnes. 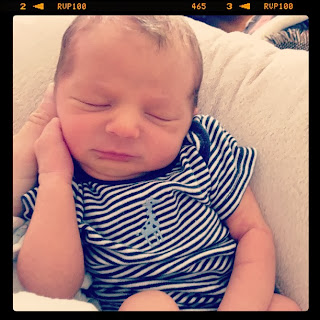 I was talking with some friends of mine and we all came to the conclusion that the first half of our life is spent just trying to figure out the first half of our life.  We seem to go through the days, weeks, months and years in a fog.
When I look back on sleepless nights, PTO meetings, carpools, endless grocery shopping, vacations, sick nights with children, neighborhood kids in and out of the house, arguments, ball games, track meets, countless loads of laundry, caring for cats, fish and dogs, Halloween, Christmas, birthday parties, Valentines, July 4th, church going, hair cuts, scraped knees, hurt feelings, and the many other things that are involved in parenting, it feels like I have lived someone else’s life.  I have moments that are forever emblazoned on my heart and mind, I have moments that I would rather forget and I have moments that are gone forever.
I would not have traded motherhood for anything……now.  There were times I was sure that God had chosen the wrong women to be a mother.  Surely He meant for these children to have a mother that was not quite so high strung, quick tempered, fed her children healthier food, was more fun, spontaneous, more patient and more creative. There were times that I was ready to run away from motherhood.  This did not look at all like the pictures in the magazines and catalogs: that precious sleeping baby, that perfectly groomed and clothed toddler, that perfectly coiffed mother with three children in tow.  No, there were moments I wanted to not be a mother.  I was tired, frustrated, anxious, overwhelmed and did I mention TIRED.  Those moments were real but I knew they were not my true feelings but temporary emotions.
The fact of the matter is that God blessed me with these children.  He blessed me with a life with them and I do mean blessed.  I would not have learned all I learned, I would not have drawn so much closer to Him, I would not have the smile lines on my face from the laughter in my home. I would not have the excitement in my heart watching my boys grow into men and my daughter grow into a beautiful woman and mother.  I would not have the friends I have because my path would not have crossed with these other wonderful people.  No, my life is definitely fuller, for me, having been a mother.
Now, I am a grandmother. Now I am in the second half of my life and life is a little quieter, and  there is not quite so much noise in the home.   Now I get to take all I learned as a mother and prayerfully pass on the good and leave my mistakes and misshapen thoughts in the past.  Now I get to love in a new way – a way I have never known; the love of a grandmother for a grandchild.  I wasn’t sure at first how it was going to feel – now I know and wow, this G-mama thing is going to be another wonderful blessing in my life.  I can’t be old enough to be a grandmother, but thank God I am one. 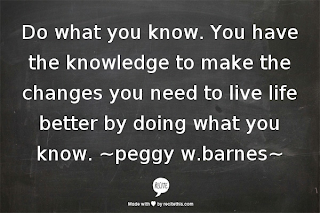 This is a phrase I often use with my clients and with myself……do what you know.
Many times we have a lot of knowledge about something but are unwilling to take the steps needed to act on what we know even though it will most often produce positive results.
Many people I know will sign up for Weight Watchers, Jenny Craig, Nutri-System,  buy all the weight loss books they can find and buy every magazine that has “LOSE 10 POUNDS BY TOMORROW”.

Many people, including me, will read fitness magazines, tear fitness articles out of magazines, and my personal favorite is pinning those ab-busting, butt-toning, calorie burning and tricep trimming exercise programs to my PINTEREST Board.
Many people I know will read relationship book after relationship book and yet
nothing changes in their relationship.
One of the things that tickles me, when working with an organizing client, is the number of “GET ORGANIZED NOW” books and magazines that they have stashed in numerous places in the house.  They also have all the “GET ORGANIZED” products, still in their original packaging.
All of this to say, while these things are not bad to read and study,  the question is are you willing to take the next step?  Are you willing to do what you know about losing weight, about working out, about your relationship, about organizing or about any other area of your life?  Many of us want the magic bullet.  We want the formula.  We want the easy way to get some of the hard things done.
That is why I say, do what you know.  When you start doing some of the things that you know, you will in most cases achieve the results you want.  It won’t often come naturally or easily but you will never regret giving it your best shot.
So what do you know that you aren’t doing? I am asking myself the same question today and hopefully will do some of the things that I know that will produce positive results in my own life.